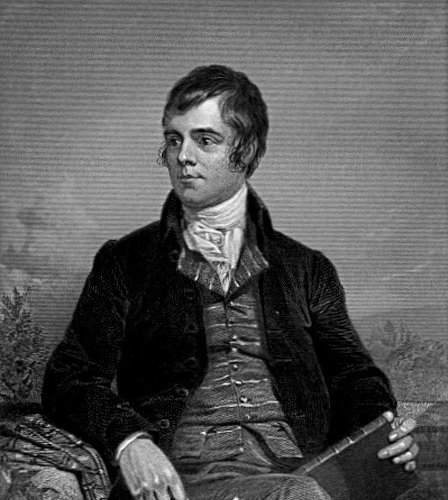 Who is Robert Burns? And, What is Burns Night?

If you’ve ever attended a Scottish wedding or celebrated Hogmanay, you will have heard Robert Burns poetry. In the run-up to Burns Night (celebrated January 25th a.k.a THIS Friday), we’ll explore who exactly is Robert Burns and why Burns Night is a cherished part of Scottish culture.

Who is Robert Burns?

While Scotland has many famous writers (J.K Rowling, Robert Louis Stevenson, Arthur Conan Doyle to name a few), Robert Burns holds a special place in Scots hearts. In fact, we voted him the greatest Scot in history in 2009, with William “Braveheart” Wallace (the man that defeated the English so Scotland could remain an independent country) coming second!

So, who exactly is Robert Burns?

Robert (also known as Rabbie) Burns was born on January 25th, 1759 in Alloway on the west coast of Scotland, about 1.5-hour drive from Edinburgh. He was born to poor tenant farmers, who despite their wealth level and inability to provide a proper education, encouraged him to read authors like Shakespeare and Milton.

He wrote many love letters, poems and even traditional Scottish songs, like Old Lang Syne, during his lifetime. It wasn’t until after his death in 1796 that he became properly famous with his works influencing the 19th-century founders of liberalism, socialism and the Romantic movement. He was widely worshipped, almost cult-like, during the 19th and 20th centuries and today, remain a cultural icon and the most well-known Scottish poet.

On Turning Her Up in Her Nest with the Plough,

O, what a panic’s in thy breastie!

I wad be laith to rin an’ chase thee,

An’ justifies that ill opinion

At me, thy poor, earth-born companion

Why Do We Celebrate Burns Night?

A few years after Robert Burns passed, in 1801 to be exact, his friends started hosting dinners and celebrations on their late friend’s death-date. Thus, began the traditional Burns Supper. Over time, the date of event moved to the ex-poet’s birthday rather than the day he died. We still celebrate Burns Night over two hundred years later!

What Happens on Burns Night?

A traditional Burns Night essentially involves celebrating the best of Scottish culture. Known as a Burns Supper, the event starts with a bagpiper welcoming the guests and followed by introductory speeches (often including the Selkirk Grace), customary dinner and poetry readings of the great Robert Burn’s famous works.

Some hae meat an canna eat,

And some wad eat that want it;

But we hae meat, and we can eat,

And sae the Lord be thankit.

What Do You Eat on Burns Night?

After the hosts’ welcome speech and the Selkirk Grace, a traditional five-course meal is served.

Of course, the meal is always accompanied by some of the best Scottish whisky.

Address to a Haggis

Aboon them a' ye tak your place,

As lang's my arm.

The groaning trencher there ye fill,

Your pin wad help to mend a mill

While thro your pores the dews distil

An cut you up wi ready slight,

And then, O what a glorious sight,

Then, horn for horn, they stretch an strive:

Deil tak the hindmost, on they drive,

Is there that owre his French ragout,

Or olio that wad staw a sow,

Or fricassee wad mak her spew

On sic a dinner?

As feckless as a wither'd rash,

His spindle shank a guid whip-lash,

His nieve a nit;

But mark the Rustic, haggis-fed,

The trembling earth resounds his tread,

Clap in his walie nieve a blade,

An legs an arms, an heads will sned,

And dish them out their bill o fare,

But, if ye wish her gratefu prayer,

Gie her a Haggis

How to Celebrate Burns Night in Edinburgh

Why restrict Burns Night to only one night? While Burns Night officially falls on Friday the 25th, Edinburgh has events on celebrating the life of Robert Burns throughout the week. Here are some of our favourite activities and traditional Burns Suppers happening in our city.

The Royal Yacht Britannia (in Leith docks) offers the perfect backdrop to a traditional Burns Supper. On Friday the 25th and Saturday 26th, you can experience a delicious four-course meal, Scottish music, the traditional “Address to a Haggis” and whisky tasting. You’ll also get to tour the historic ship and enjoy a drink and canapé reception.

Step back in time and experience a hauntingly good Burns night at The Real Mary King’s Close on the 26th of January. In partnership with Wedgwood Restaurant, the team at Real Mary King’s Close will throw one fantastic celebration with poetry readings and a delicious traditional a three-course meal. After dinner, you’ll get to take a Burns inspired tour through the historical close to discover the streets under Edinburgh and learn about the city’s hidden past. Finish the evening by raising a glass of whisky to the famous poet.

Get your groove on at the Three Sisters ceilidh. On the 25th, the Three Sisters hosts a traditional Scottish dance party complete with three-course meal of cock-a-leekie soup, haggis with neeps and tatties, and raspberry and whisky cheesecake. After you’ve toasted Scotland’s famous poet and enjoyed your meal, enjoy a live ceilidh band and learn some traditional Scottish moves.

Where to Stay in Edinburgh on Burns Night

We have many fantastic self-catering holiday apartments near some of the best Burns Night celebrations. If you’re attending the Burns Night Supper at Royal Yacht Britannia, our Britannia Quay Apartment is within walking distance. For those getting their groove on at the Three Sisters, our Tron and West Bow holiday apartments are within a three-minute walk. If you’re attending the Burns Night event at The Mary King’s Close or any other city celebration, we recommend staying in one our Royal Mile apartments like the High Street or Hunter Square.

We look forward to welcoming you to our beautiful city and helping you celebrate Burns Night!

Search all our properties